Hashtags are a handy social media identifier for writers. This simple symbol – # – can help writers like myself network  with other key stakeholders who use social media.

Hashtags can help a writer

What is a hashtag?

A hashtag is a word or phrase proceeded with a hash sign. It highlights key words and it enhances search results on social media.

Twitter was the first social media platform to introduce the hashtag. It was first proposed by Chris Messina in August 2007.

how do you feel about using # (pound) for groups. As in #barcamp [msg]?

The # symbol has been known by other names. If you are a musician you will recognise the hashtag’s similarity to the sharp sign in music.

Other names for the # symbol

Social media sites that use the hashtag

You can overuse the hashtag when posting.

Recently, I had a new follower who used more than three hashtags in every post. This unfortunate overuse of the hashtag was a factor in my decision not to follow this user back.

Most social media advisers will advise you to not use more than two or three hashtags per post. Personally, three for me is overkill, two is okay, one is perfect.

I admit that in the past I have made the error of using too many hashtags in a message. Before you press send, it is really important to think about who your audience is and why the hashtag is important for your communication. Don’t just spam popular hashtags to get noticed.

Are there too many hashtags for writers?

There are hundreds of hashtags that a writer could use to enhance a post. If you are trying to use all these hashtags for writers regularly, you may want to consider whether your time spent on social media using hashtags could be time better spent writing.

If you are considering using a hashtag, search for the hashtag first and review what other people are posting with this tag and how regularly. This will give you an idea of the audience and whether your post suits the group or theme.

One hashtag that I have enjoyed using on occasion is #amwriting. This hashtag is used by writers while writing to connect with other writers doing the same thing. It is a useful hashtag for group motivation, because writing can be a lonely endeavor.

Another hashtag group that is useful for writers is #amediting. I’ll be making use of this group over the next few months as I edit my novel. 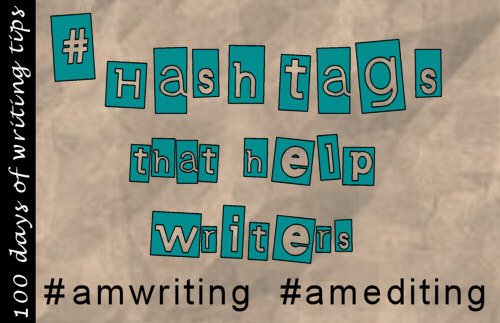 Online research for your writing can be broadened with the use of hashtags. By searching your favorite social media sites for relevant hashtags you can find useful links and helpful tips on the topic. Searches can also connect you with users who have knowledge and experience on the topic you are researching.

Hashtags that I find useful for research include:

If you are promoting your writing, there are hundreds of possible hashtags you could use.  I suggest selecting a few of the ones that will give you a good coverage. Try not to use too many hashtags in the same post, all at once or in quick succession. It could get you flagged as a spammer.

Some marketing hashtags for writers are genre specific, like #SFF. Generally people post to this hashtag because they are highlighting content with a science fiction and fantasy theme. This hashtag group is sometimes hijacked by Sarah Ferguson Fitness and supporters.

Others like #books and #novel are more generic hashtags.

While you can refer back to other people’s lists of hashtags on a regular basis, it is a good idea to come up with your own list of valuable hashtags that support you as a writer.

Research hashtags that will work for you as a writer before you use them.

If you use TweetDeck you can set up a column that matches the hashtags you want to use. Follow the ones you want to use and find about more about the types of tweets they generate.

Hashtags are a valuable tool for writers when used wisely. Find the hashtags that work for you. Keep in mind the time you spend on social media is time you could be using for writing.

Be Awesome: Spread the love.

Get "The Blog" updates

On Sale This Month